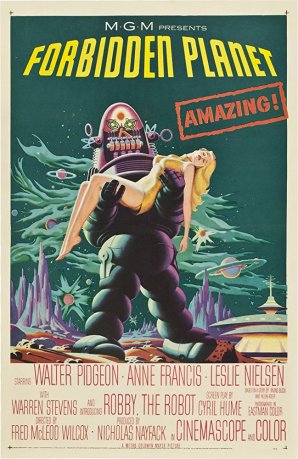 Anyone remember Star Trek? The original I mean. Well, I bet you didn’t know that it was greatly inspired by this movie. In fact, I bet if this movie didn’t exist, then Star Trek wouldn’t exist, and, because science-fiction never went mainstream, then Star Wars wouldn’t exist, or Interstellar, or Cowboy Bebop, or really, anything with a science fiction theme, no matter how slight. This movie pretty much started it all for the genre. It was the first time a studio actually funded a sci-fi with real money rather than that fake stuff they’d throw at the amateur filmmaker’s of the time. Really they didn’t see it as being something people wanted.

So, they make an expensive sci-fi one time and it makes a Kajillion Dollars so all the other studios try to jump on the bandwagon and make a bunch of crappy sci-fi ripoffs and then wonder why they’re versions didn’t do nearly as well. And this business model of trying to copy successful products, and then failing horribly, is still around today. I guess that’s what happens when people don’t learn anything.

Anyway, I mentioned Star Trek before because this feels just like watching an episode of Star Trek. The special effects are about the same level, the pacing and plot points feel very similar. I think if you’ve seen any Star Trek you would immediately recognize all the tropes.

The one thing that it doesn’t do is have a diverse crew on the ship. Instead it’s all a bunch of white guys. There’s only one woman in the movie actually, and she’s also white. I guess I shouldn’t expect forward thinking in 1956, but there’s a lot that could have been done here that just isn’t. I guess this director’s vision of the future is one that was left unchanged by the thinking of the day. I’m glad movies today aren’t so fucking prejudice. I’m guessing if you made a movie with 50 white guys and 1 white woman you’d piss off a lot of people and they probably wouldn’t go see your movie…well, except racists and Nazis, and considering how much those groups seem to be coming out of the woodwork lately, your movie would probably make more money than it should. As long as you don’t mind an audience full of racists and Nazis.

Outside of that, I thought the movie was fine. The story, acting quality, and special effects were about on par with a bad episode of Star Trek. Which was really something for its time. This movie was made 15 years before the show and the technology used is breaking new grounds. However, watching it now, its age really shows.

This movie loses points for having waaaaaaaaaaay too much exposition. I guess science was a new thing at the time that everyone was super impressed by all the things. But seriously, this movie is, like, 90% people over-explaining everything.

Why you should watch this before you die: Historically, this was the first sci-fi blockbuster. Nowadays, I would say you would get more enjoyment from watching a Star Trek episode. This is where science fiction on screen truly began though, so watch it if you’re interested in that. Everyone else though, I would say pass on this one.