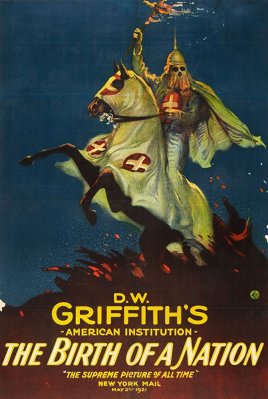 This movie is as brilliant as it is racist. I hope this is the first and last time I ever have to say that about anything. This was the first feature-length movie produced in America, which is really unfortunate. And the worst thing about it is how revolutionary it is (I don’t think I’ve ever said that about anything either). It’s cinematography, the close ups, wide shots, pans, zooms, things everyone knows about now because it’s so common in today’s movies. But here not anything like it was ever seen before. Truly groundbreaking stuff, like the war scenes in the first part of the film. At the time I’m sure it would have been pegged as extremely graphic, though from today’s standards quite tame. But the spectacle of it all is quite breathtaking.

Really, if this movie stopped halfway through, I think I would have been fine with it. It would have been a film about the American Civil War done from a Confederate perspective, something you rarely see in films nowadays but seemed to be quite common from this time period and for about twenty years or so after. I guess it’s easier to peg them as the villian now, but they did, you know, treat a race of people as property….

This movie did not need to be 3+ hours long. There are more than a few scenes that just drag on. It loses extra points because, since it’s a silent movie, you don’t need to show extended scenes of people talking to each other. I mean, you want a bit, right silent filmmakers? Just to show that people are talking, but you don’t need them to have an entire conversation on camera since all you’re going to do is explain it in an intertitle anyway. I bet this movie could have been 2 hours long without changing anything about the story. Or an hour long if you got rid of the incredibly racist second half. See the genius of it and none of the historical-revisionist, pro-KKK bullshit.

Also, blackface, never do blackface, or cast a white person in a non-white role. I don’t know why Hollywood does this, like, ever, but it’s still being done. Johnny Depp in Lone Ranger anyone? What the hell? It’s the 21st century but many of us are still stuck in the 1800s with our social mentality. I guess, unfortunately, some of those people also make movies.

The second half of this movie is where the problems start. Though the first half does have some people in blackface and shows slavery in somewhat of a positive light, it doesn’t flat out say anything negative about race or do more than show us a southern family during the Civil War and the horrors of that war. It also has a fairly realistic showing of the assassination of Abraham Lincoln to end it before declaring “end of the first part” in DW Griffith’s signature bordering. Again, if it just said “end of the movie” and that was it, it would have been a pretty good, beautifully shot film film about the Civil War and I would have been mostly applauding it. But it just had to have that second part…

This is where things just take a turn for the exceptionally stupid. As soon as the “Reconstruction” part begins, it starts showing African-Americans as being conniving, backstabbing, lying, rapists. It’s just ignorant. It shows a world where black people start taking over in the government and this is the worst possible thing ever so the Klu Klux Klan has to rise up and be heroes to restore the world for all those traumatized white folks.

For some reason, DW Griffith couldn’t understand why anyone would be upset by his movie. I guess this is just how he saw the world. That’s too bad because he’s an amazing director, despite his horrible racism.

Okay, when it comes to cinematic racism, usually you might think of a movie like Mudbound which shows the horrors and dangers of living in a world like that. Here, it’s not like that. If it was like that, showing the horrors of extreme racism just like it shows the horrors of war in the first part, then I wouldn’t have a problem with it. Here it’s more like it’s showing you a whole bunch of lies about a race of people, presented as fact, to make the audience hate and fear black people. Then it shows the KKK as being the force that protects Southern whites from the “animalistic” blacks. This is racism propaganda meant to harm and frame a whole race of people in the most negative light it possibly can.

Why you should watch it before you die: Because you’re a film historian. Otherwise I’d say just forget this racist garbage. Though being well shot and historically significant, it is still just racist garbage. If you do decide to watch it, I’d greatly recommend stopping after the first half. Also, it’s free on YouTube, but since I can’t recommend it I’m not going to provide a link.