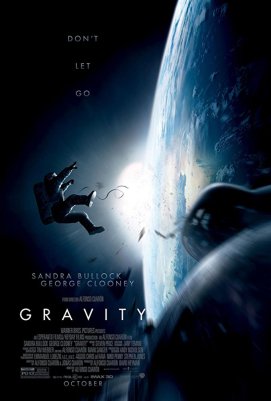 This is a sci-fi film that is (mostly) realistic about a disaster that is theoretically possible. A russian rocket hits one of their satellites and the resulting explosion causes the debris to be propelled into Earth’s gravity at 50,000 miles per hour destroying everything else in Earth’s orbit. This includes a group of astronauts working on the Hubble telescope. If this ever actually happened, people couldn’t ever go to space again!…or for 20 years…or something. So, you know, don’t shoot missiles into space, please.

Good acting from Sandra Bullock and George Clooney, good thing as they are the only people in this movie, more or less. Being that this is a disaster movie, it really doesn’t have to do more than have explosions. However, it really does more than that on terms of scale to make things feel like it’s all really happening. It’s a survival story of what it takes to live…IN SPAAACE!!!!

It does have a few issues and most of them come from the fact that this movie had to be 90 minutes long, after all that’s how long it took the debris to get around the Earth, and being that’s short for a movie I shouldn’t be feeling so much like I’m just waiting for the next thing to start. Once that stuff starts, it’s amazingly intense, but until it does it can be a bit of a chore to get there.

There’s such beautiful imagery in this movie it makes it feel like some kind of art film, though really I think they were just trying to make things impressive for the Imax and 3D versions of this movie. Still, pretty impressive, even in its small-screen, 2D form.

Since it’s been on my mind since it happened I’ll point this out: I really don’t like pointless scenes. Sandra Bullock crying at a person who can’t help her and she doesn’t understand, which includes a bit where she howls like a dog, and goes on for much longer than it should. I mean, okay, the scene does become interesting, but it takes a long time to get there.

Another thing I should applaud is the sound design. It stands out and helps to both make things tense and make things seem that much more real.

Why you should watch it before you die: Because you’re into disaster movies. Or realistic space movies though this isn’t anything special in the sci-fi genre. This might be the best disaster movie I’ve ever seen but I honestly can’t think of another one I like that much…

+7.5: as good as Guardians of the Galaxy