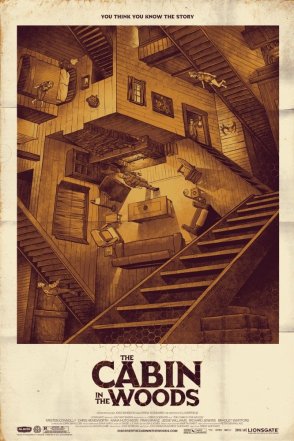 Did you ever watch a horror movie and wonder why everyone acts so stupidly? Why the killer always gets such a high body count? Why do they split up? Why do they always read the Latin part? Did you ever wonder if maybe it was all a secret, shadowy organization that uses drugs, remote locations, and real monsters to murder people? Well if not, don’t worry as Joss Whedon and Drew Goddard did and then made a film about it. And by the Old Gods, it’s one of the best horror movies ever made.

What’s great about this movie is that it’s able to be both really intense and darkly comedic. It takes every familiar horror trope we know and turns it all upside down with the premise of “all horror movies are real, and here’s why” then just runs with it. What’s great about it is that it shows us both sides, something most horror flicks don’t do. In this case instead of heroes vs. killer, it’s the heroes vs. secret organization that controls everything, heroes and killers alike. It’s great though, and maybe it doesn’t sound like it’s also hilarious, but it is.

The biggest problem with this movie is that it doesn’t really get going until it cuts from the kids in the cabin to the people in the underground compound. The parts before are maybe just a little slow and I wish it would get to this part sooner. I’m just not sure if it was all necessary for the setup. Some of the conversations, though vaguely important for the backstory of all the characters, don’t really do anything in terms of overall plot.

Outside of that though it’s exceptionally well-written and entertaining. I’m glad this gets to stand on as a one-of-a-kind horror flick. It’s too bad more movies from the genre aren’t this smart or this awesome.

Why you should watch it before you die: Because it’s just that good. Also if you’re a horror fan this one shouldn’t be missed as it’s an even more effective film the more you know about the genre.

-1: Unnecessary scenes in the first act