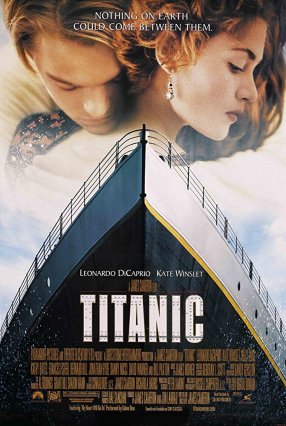 This movie is a bit of a conundrum for me in that I just don’t understand why people like it so damn much. I mean, it’s okay but nothing special to me. Mostly it’s just boring, many of the scenes are pointless, and the acting, for the most part, is just terrible. Also that song is just awful and they play parts of it throughout the movie just to remind everyone how terrible it is. It does have some cool effects later in the movie but it really doesn’t have to take OVER HALF THE MOVIE to get to the good stuff. I guess this is going to stay a conundrum for me and nothing I do here will matter. The people who like this movie will continue to like it and the people who hate it will continue to hate it and that’s that. Oh well, here we go.

Anyway…the things I like in this movie are that Kathy Bates does a pretty good job as Molly Brown, but she’s not in it nearly enough, and I think the scene about an hour in where Jack takes Rose to the party in 3rd class was an okay scene and did a better job of showing the difference between the characters and the classes than any scene before it.

Okay, now my complaints, I don’t like any of Leonardo DiCaprio’s or Kate Winslet’s acting in this movie. They take the whole movie down. They were probably just hired because they had pretty faces more than they could act the part. I’ve seen them both act better in other things but here I think it has to do with being in a period piece. What I talked about John Malkovich’s performance in Dangerous Liasons, that some people don’t have to chops to act like they were from another time, or just a specific time period, but whatever it is, the two main characters can’t cut it here. So what are you gonna do? You can cover up bad acting in a lot of ways. Good music sometimes, but no help with that here since all the music is basically based around that “Heart Will Go On” song. So you can also cover it up by just having a lot of action so your characters are basically always moving and busy. Of course they can’t act, they’d die if they did! This movie does eventually do this but you have to sit through a whole first half of a 3+ hour movie that’s just crap. But even then it’s just a half-decent disaster movie, a genre I’m not a big fan of to begin with…

There’s also a lot of pointless scenes. Many things that just stood out how pointless they were. The most obvious of these are any of the scenes that are set modern day. They didn’t have to do that, at all, and because they’re pointless all the V/O narration from future Rose was equally as pointless.

Also the shoehorned in romance that pretty much becomes the main plot is just really, really cliche and general. It’s nothing special and considering this movie is called Titanic, I think the story should more be about the ship and the event than this second-rate romance. I don’t even know why it’s in there because James Cameron’s strong suit is definitely not with characters with emotion. He’s better with ladies who punch aliens, or robots who terminate, you know? He’s not the romantic-directing type.

Why you should watch it before you die: Because you like romantic-disaster movies set in historical settings.

-1.5: Most of the other scenes are also pointless

+5: Pretty good once the boat starts to sink