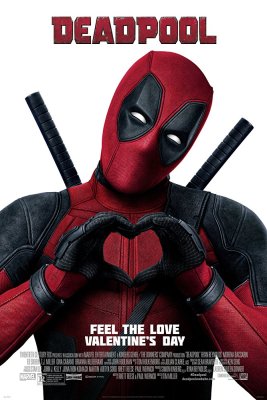 Deadpool was a huge surprise when it came out. It was the first R-rated superhero movie to come out that was any good since Blade at least as far as I remember. It was a huge surprise too that Ryan Reynolds turned out to be so perfect in the role considering how terrible it was in that Wolverine movie when they sewed the Merc with a Mouth’s mouth shut. Stupid move all around, here though it’s great and everything works in this adaptation of the Deadpool comic books.

Much of what’s present here is cliche to many superhero movies. The villain isn’t more than just another monster of the week, evil and awful and in there only to have something to fight against, more or less. The woman is kind of just there to become a damsel in distress later in the movie, though I don’t mind the romance subplot, something that wasn’t present in the original comic line that told the story of Deadpool vs Francis/Ajax. I’m glad they added it though as it makes for some great scenes.

What makes this movie above the others is that it’s just so much fun to watch. Ryan Reynolds kills it as Deadpool, the wisecracking mercenary who plays by his own rules and realizes he’s a character in a comic, and the third-wall breaking throughout the movie really solidifies Deadpool’s character and comedy. It makes it both a great superhero adventure and a satire of every superhero movie that’s come before it.

It’s also something that’s surprisingly well edited, and considering how much Fox Studios kept taking money away from this movie it’s surprising there’s any action in it at all. But what is there, is not only great but also memorable thanks to the impressive editing and special effects. Who can forget the scene where Deadpool has to count down his bullets because he has to conserve his ammo? Or that great “fight” where he attacks Collosus, a man made of steel, and breaks his arms and legs in the process? It’s really good at mixing Deadpool’s comedy with action, or Deadpool’s take on the X-Men, or really anything he says or does. I think i could watch him all day, but I guess that’s what his comics are for.

Why you should watch it: If you’ve seen any superhero movie that you liked and can handle sex, violence, or language, then I highly recommend Deadpool. Hopefully the sequel is just as good.

+7.5: Entertaining and funny throughout

+1: Ryan Reynolds is perfect as the character