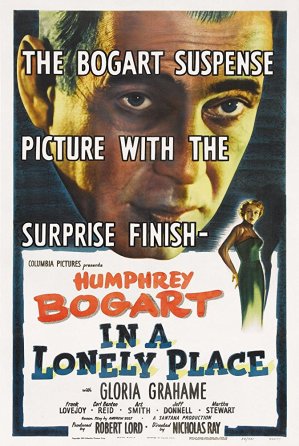 This movie stars Humphrey Bogart as a down on his luck screenwriter who’s suddenly suspected of murdering a young girl. His neighbor helps get him off but then she starts to have her doubts.

The dialogue throughout the movie is both witty and smart, though some of it is maybe a little too much exposition. Much of it is very well acted also, but some of the actors aren’t as good, their adequate, but so many good actors makes them really stand out when they’re there.

There’s something about this movie that makes me nostalgic for the 50s, despite not even being born yet. It just has every film cliche from the time period all mixed into one. It’s a noir because every movie was a noir back then. It’s got a song in the middle of it because every movie had a song in the middle of it. A man in it gets angry and drives off erratically in a huff because every movie has that in it as well. It has Humphrey Bogart in it because– you get the picture. Since this was released in the year 1950 exactly, it was probably before many of these things became cliche, but watching it now these cliches start a chain reaction, compounding on one another like a slowly gathering unstoppable snowball and it becomes amazingly distracting and totally stops my suspension of disbelief for most of the film.

Also, this movie loses the plot in the middle of it. It becomes more about this romance between the two main characters and doesn’t exactly do anything for the rest of the story. I guess you need that to set up the third act, but the third act is too bogged down in unnecessary scenes it just makes me wish it would get to the point. This movie feels like there just wasn’t enough to it to edit it down anymore and they couldn’t do that without it being only 45 minutes long or something. It has some intense, and some interesting scenes that make it worth watching but you have to shuffle through quite a bit of garbage to get there.

Why you should watch it before you die: I feel if you’ve never seen a 50s film you could probably just watch this one and get the gist of the whole era. Outside of that, I’d probably only recommend it to Humphrey Bogart fans. It’s nice seeing him play a character unlike most of his roles, but he had better roles and there are better movies out there with similar themes.

-1: Way too many unnecessary scenes