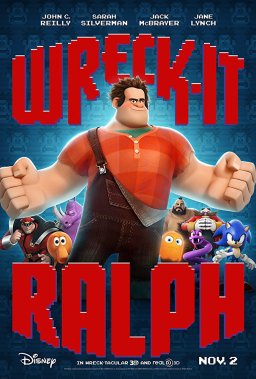 Wreck-It Ralph is one of those movies, like the movie 9, probably doesn’t deserve to be on a list everyone should watch, but as far as Disney-animated films go I think this one is not just a pretty good kids movie and an hilarious comedy, but it’s probably the best video game adaptation made so far, despite not being adapted from a real video game. Then again, if someone, say, took Sonic the Hedgehog and made it into a movie, but then that movie was all about how Dr. Robotnik/Eggman was unhappy with being a villain and instead escaped the Sonic the Hedgehog game to save the Princess in Mario? That’s kind of the essence of this movie and probably why they had to make up a few of their own video games instead.

This movie has great voice acting, and being that most of the cast aren’t trained voice actors themselves it’s a good job for the casting director, and the actual director for that matter. Also, being that this is one of the most meta stories ever. Video game characters and how they behave when no one is playing with them. It sets up the universe in the first scene, then proceeds to tell an original self-discovery story inside that universe. Also, it has one of the best third acts in any movie I’ve seen thus far, which is weird being that it’s, you know, a kids movie inspired by and starring video-game characters. Also, the jokes throughout the film are (mostly) smartly written and well-executed.

My only major complaint is that it enters the 2nd-act doldrums, or a term I use for when movies slow down to build tension and, basically, waste time. Sometimes this works when, say, a movie has a slower pace and maybe needs to show something like emotionality before setting up the heart wrenching finale,  but most of the time it just feels (to me) like the movie is only doing it because the movie isn’t long enough, or maybe that’s just where the Illuminati is throwing in hidden messages or something. Anyway, it’s not that long when this movie does it, but it’s just long enough for me to notice it and it slows greatly,  which feels very out of place for this otherwise fast-paced movie.