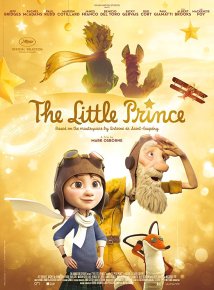 Personally, I love stop-motion animation films. I wish they still made them more but I guess with the development of CG there isn’t nearly as much demand for it. But we’ll still get a claymation movie every few years, like this one (though this is also enhanced through CG), or a few of Wes Anderson’s canon. This is also the highest-grossing French animated film, and this marks the first time I’ve watched a “new” (to me) movie and put it on My List.

This movie is about a young girl who’s being raised by a workaholic, single mom and raised to basically be a miniature version of her mother. Then when they move so she can go to a good school, then she meets an eccentric neighbor, and old man who at first she doesn’t like but they become friends as he regails the tail of the Little Prince to her. A young boy who lives all alone on a very small planet with his rose.

What makes this movie special is that it’s a kid’s movie but has very high concepts for “just a children’s movie” though that’s all it is. It’s a movie about one’s place in the world. The Little Prince knows his place. But what is the place of the young girl? She realizes, through this old man’s childlike attitude, that her own childhood is passing her by and she starts sabotaging her mother’s plans! Okay, it’s not really massive she just starts changing the magnets around on the schedule board.

Anyway this is a really good movie, so good I kept forgetting it was a mixture of claymation and CG. It has a concept surrounding friendship and growing up and learning to be your own person. It feels like a movie timeless beyond its years and will be watched by everyone forever (probably).

I have a few complaints though, for one I think that some of the comedic moments are a bit out place with this otherwise serious, though fantastical, movie. My other complaint is that this movie suffers from a case of having too much plot. There are a bit too many things going on and maybe one of the plotlines could have been dropped, especially considering that the movie kind of just forgets a few of those as it goes along.

Why you should watch it before you die: It’s an action-adventure movie with fantasy elements, a lot of heart and great animation.