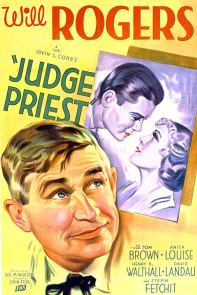 This movie is kinda racist… I mean, it’s not as racist as Birth of a Nation, not as tame as Gone With the Wind, but this kind of in between, being both ignorant and trying to whitewash the past as if African Americans actually enjoyed the life of slavery they had and once the Civil War was over they were just more than happy to get back to work for the white folk. It just bugs the hell out of me, were people really so ignorant back then? Why was everyone so racist? Why are so many people still so racist? I guess this movie has something going for it that Birth of a Nation and Gone with the Wind didn’t, it’s an hour and a half long, about 2 hours shorter than the shortest of the other two movies, and at least no one is in blackface, I guess.

The actor Stepin Fetchit is in this movie, who I decided to research, and what I at first thought was racist was really just him playing his comedic character of the “Coon” who was a “lazy-eyed, dimwitted, lovable, scoundrel” or something like that. It was just one of his personas, and one that made him an African-American millionaire in the 30s. But his comedic character became one of the biggest racist caricature in American history, but that’s not entirely his fault… I guess… anyway, his character itself isn’t racist, just what people did to it after the fact is…I guess…

What is racist is every time they sing a song in this movie, which is a lot for something that isn’t a musical. Every time it’s black people singing about how the “darkies” (yes, they sing that in one song, someone wrote that down in a song that’s meant to be all patriotic, and it’s a super recognizable southern tune, next I’m going to find out the Star Spangled Banner was written about burning Jewish people and homosexuals or something like that) are happy to live in Kentucky or something similar. It’s really off putting.

Everything else in this movie is actually pretty good. Oh, except that there are two first acts, better not forget that. Look, if you’re going to have two first acts it’s okay, really, but you have to make sure that both are over quickly, you want the first act to end about twenty to thirty minutes in, if you have a first act that introduces Judge Priest, and then another to introduce the crime committed and he has to oversee, then you don’t want both these sections to be twenty minutes, it makes what you’re doing really obvious and just eats away at your audience’s attention. Come on, we came here for the good stuff and, sorry to every movie, first acts are never the good stuff, and when they are, they’re secretly second acts, which means the movie has 2 second acts, and no one notices, because second acts are exciting, usually not as exciting as the third act but you can’t start in the third act, can you? Hmmm…. ANY-way, These sections could easily have been shorter, this movie isn’t very long but shaving ten minutes wouldn’t have hurt the film any.

Should have done this first but here’s the story: Judge Priest is a widower, confederate war veteran, and a Judge, and we get to learn all this in the movie’s first first-act. Then they set up the case, that someone who is usually the quiet type, stabs someone randomly in cold blood. It’s Judge’s biggest case yet! Until he’s forced to step down, wait, what?

Why you should watch it before you die: It kept me fairly entertained. I think I just like courtroom dramas though, but outside of the racist singing (since I’m forgiving Stepin) which is mostly in the first-first act, I think this movie was pretty good.