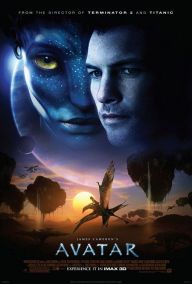 Watching this movie is weird. It’s not quite like anything I think I’ve seen, and not in a good way. It feels more like I’m watching a 6-hour miniseries that’s been edited in half so they can show it at 3 a.m. on cable. So, the scenes are an odd mix of montages, voice-over narration, and people just glossing over information as we watch long, drawn-out scenes that showcase the world their in. In a similar way, it feels like it’s dramatically changing genre every time it switches scenes. If this really were originally a miniseries I’m sure the shifting of tones would be more drawn out and make more sense on the smaller screen. But since this is the final product of a movie, well, you know…

For those who don’t know, this movie single-handedly ruined movies for a bit after its release. Mostly because it made a kajillion dollars, and also it was 2 hours and 45 minutes long, which is the biggest reason I think that blockbusters still think they have to at least hit the 2 and a half hour mark. The other thing is that it was shot in 3D, which made every movie try to be in 3D after that before they realized, once again, that nobody cares.

Geez, this movie just glosses over all information, huh? Which is weird because it’s so friggin’ long, it doesn’t really explain more than “we want their stuff, let’s infiltrate them and then kill them” meaning that in this science-fiction movie there is little to no actual science, which is fine in many movies, but here there’s things like mountains that actually float on clouds, and no one ever says “oh that’s because…” it just shows you these things and then never mentions them again letting you think that everything on this Pandora is somehow magical, which is just stupid. SO, not a sci-fi, it’s a fantasy, but mixed in with an American War movie IN SPACE! Okay, I’m not sure what that means as a clashing of genres but I don’t think it’s good.

The Romance is boring. It doesn’t show us anything we don’t know and is so cliche that it feels forced. Of course they’re in love, the plot demands it! If he doesn’t fall in love then he won’t want to betray his people! Even though most loves in real life are quick as after the initial pheromones you realize you both actually hate each other, but you know, I’ll still give up everything I’ve ever known for you! Okay, I guess that’s actually true of many romances…fine Mr. Cameron, you get a pass.

I don’t know if this movie is supposed to be some kind of commentary/retelling of the genocide of the American Indians, or if it’s supposed to represent Viet Nam somehow wherein a mighty empire with superior technology is successfully fought off by an army with nothing more than a home field advantage. Either way, it doesn’t really have comments to make or ideas to portray about either of these things outside of constant expansion is bad? I guess? It really just slowly devolves into an action movie of aliens versus robots anyway and presents just as many ideas as you would expect from such.

I ask myself way too many questions about the anatomy and sexuality of the Navi. I mean, they don’t have nipples, so they don’t nurse, but they wear things that cover up where their genitals would be, except they have genitals in their hair that also create some kind of psychic connection with the animals they ride? This is when some kind of scientist explaining something about how a normal Navi functions might be useful. But you know, just let everyone decide things themselves and let us think all Navi have sex with animals.

Why are so many scenes so drawn out? We didn’t need to watch everyone suffer after the army blows everything up for so long. I get it, it sucks, and then it goes on for five more minutes.

At the end of the day, this movie is just too long. It needs one less plotline, how about the scientists since there isn’t actually any science in this movie anyway? Then it’s just the army there trying to infiltrate this alien society which would have also been a lot more interesting as it could have introduced the army as the good guys and then it turns out their awful in a crazy twist. Also, there’s too many scenes that just showcase the world their on, which I just don’t care about at all, you make me care about the world through action, not just showing me how beautiful it is. The ocean is beautiful, it’s still full of sharks.

Why you should watch it before you die: If you were alive and over a certain age in 2009 you probably already watched this movie. If not, I don’t know, there’s better things out there like this movie, there’s better James Cameron movies too, so I can’t really recommend it, maybe if you can find an edited down version that’s about 2 hours long, but the way this movie flows as is just isn’t as good as it could have been.

+6: It’s good until I start checking how much time I have left and start shouting things like “Still and hour and a half, what?!” and scare the neighbors

-1: Too many cliches/genres/boring scenes/exposition between boring scenes that doesn’t really explain anything/thoughts about Navi Sexuality

-1: devolves into nothingness, it’s kind of worth watching just for that, I suppose, this movie has too many plotlines and it feels like it’s introducing four different movies at once. Then it suddenly just becomes a corny action movie STILL AN HOUR FROM THE END, WHAT!? Sorry Mrs. Johnson! I’ll keep it down!